Online ordering for this show has been closed. Tickets will be available at the door for Saturday’s performance (cash or check only).  The box office opens at 7:15 pm. 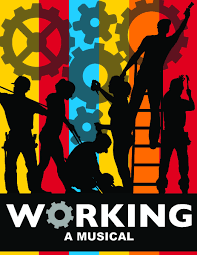 Based on Studs Terkel’s best-selling book of interviews with American workers, Working paints a vivid portrait of the men and women that the world so often takes for granted: the schoolteacher, the phone operator, the waitress, and the mason, just to name a few. Nominated for six Tony Awards, this classic has been updated for a modern age, featuring new songs by Tony Award-winning Lin-Manuel Miranda, as well as favorites by Stephen Schwartz, and James Taylor.

Tickets ordered online will be held and can be picked up at the box office the evening of the show! Box office will open at 7:15. The house will open at 7:30. All tickets are general admission. (No assigned seating)

Seriously, this is how I'm blocking CLUE. 😂 Eve

Scored all these great set peices at Repurposed. A

The CLUE cast list will be posted Wednesday mornin

CLUE auditions tomorrow from 1-4! Information and

Our summer camp kids had a great week learning sce